[Text taken from the booklet "An International Tribute to Cecil and Ida Green" held in Washington, D. C. in 1979.] 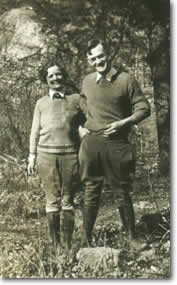 Cecil Howard Green was born in Manchester, England on 6 August 1900. He was the only son of Charles Henry and Maggie (Howard) Green. In 1902 the family sailed from Liverpool to North America, settling in Sydney, Nova Scotia. During the next several years, Cecil's father worked hard to find his place in his adopted land, and this resulted in an ever-westward migration for the Green family. From Sydney they went to Montreal, Toronto, and San Francisco where, as a witness to the great earthquake of 1906, young Cecil received his first lesson in geophysics. Later in 1906, the Green family made a further move to Vancouver, British Columbia, where Cecil's father found work in the mineral industry as an apprentice electrician.

Cecil attended Vancouver's public elementary schools and then went on to King Edward High School. After graduating in 1918, he enrolled in the University of British Columbia, focusing his attention on science and engineering courses with an eye to making electrical engineering his career. His summers were spent working with his father as an electrician's helper. Because of his interest in electrical engineering, his chemistry professor, an M.I.T. graduate, suggested that Cecil apply for admission to the Massachusetts Institute of Technology. His application accepted, Cecil entered M.I.T. as a transfer student in 1921. Two years later he graduated in the Class of 1923, receiving his Bachelor of Science Degree in Electrical Engineering. He stayed on at M.I.T. for another year, and in 1924, was awarded the Master of Science Degree.

At M.I.T., the curriculum of the Cooperative Program (Course VI-A) in Electrical Engineering required that classroom and laboratory instruction be combined with practical work in a participating industrial plant. Cecil was assigned to the General Electric Company's Lynn, Massachusetts, and Schenectady, New York, plants. It was in Schenectady, while working on his thesis "No-load Flux Distribution to Synchronous Machines," that he met Ida Mabelle Flansburgh, a General Electric statistician.

When Cecil finished his studies in 1924, he returned to Schenectady as a full-time employee in General Electric's Turbine Generation Division in the Alternating Current Engineering Department and as an instructor in advanced engineering at GE's school.

Ida Green was born in Pittsburgh in 1903. She and her younger brother, Frederick Louis, were the children of Louis Wilford and Laura (Bolton) Flansburgh. Shortly after Ida's birth, the Flansburgh family moved to New York where they spent several years living in the scenic Adirondacks. Ida attended elementary and secondary schools in Schenectady. 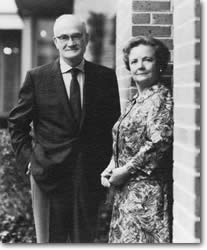 Soon after their marriage, Cecil and Ida moved to Cambridge, Massachusetts, where Cecil took a job as a researcher in gaseous tube devices at the Raytheon Company. In 1928 he left Raytheon to work as a Production Engineer in the Wireless Specialty Apparatus Company in Jamaica Plain, Massachusetts. A year later, he and Ida drove across the country to Palo Alto, California, where Cecil accepted a position as an engineer in the Electronics Department with the Federal Telegraph Company (ITT). In 1930 he left Federal Telegraph to join Geophysical Service Inc. (GSI) in Maude, Oklahoma as a Field Party Chief. However, shortly after he arrived at GSI, the discovery of oil in the East Texas oilfield eliminated the need for further exploration, and GSI employees were encouraged to try and return temporarily to their previous employments. Cecil returned to Palo Alto and Federal Telegraph. A return trip East was made in 1931 when the Electronics Laboratory of Federal Telegraph was relocated in Newark, New Jersey, and Cecil became its Director. In 1932 Cecil and Ida were on the road again, this time to Dallas, Texas, where Cecil responded to a call from Eugene McDermott to rejoin GSI as a Field Party Chief. Later Cecil would become one of the principals in reconstituting GSI and would spend his entire professional life there.

Cecil's decision to return to GSI marked a turning point in the lives of the Greens. There he met oilmen, J.C. Karcher and John Erik Jonsson. In later years, Karcher withdrew from the company, and Green, Jonsson, and McDermott would become valued friends as well as astute and indispensable business colleagues.

As GSI expanded, Cecil became a regional supervisor in 1936. In the late Thirties, however, with Hitler on the march in Europe, war threatened foreign oil exploration and GSI's parent company, the Coronado Petroleum Company, moved towards acquisition by Standard Oil Company of Indiana, with GSI as part of the transaction. Cecil and Ida risked their life savings to join with Henry B. Peacock, McDermott and Jonsson to buy GSI as partners in a reorganized company. The papers were signed on December 6, 1941, with Cecil becoming Vice President. Mr. Peacock withdrew after about one year, leaving the triumvirate of Green, Jonsson and McDermott. Cecil rose to President in 1950, became Chairman of the Board in 1955, and Honorary Chairman of the Board in 1959, a position he held until 1975. 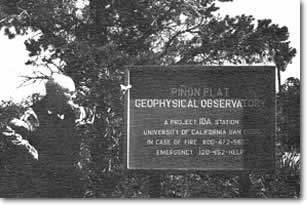 During the next decade, GSI grew rapidly, pioneering the use of the reflection seismograph in the search for mineral resources. It became not only a major geophysical exploration company, but also developed a large electronics manufacturing capability. Since electronics instrumentation was urgently needed to help the U.S. war effort, the owners of GSI established Texas Instruments Incorporated in 1945, a company which later became a giant in the electronics industry. Cecil served as a Director of the Company from its inception until 1975 when he became an Honorary Director.

When the Greens settled in Dallas, Ida became involved in a number of community activities. She solicited major gifts for the United Fund, helped raise financial support for the blind and for a home for juvenile delinquents.

She enrolled in Southern Methodist University and took an active part in the American Association of University Women. Her work in this organization included service as a Vice President of the Dallas Branch and Implementation Chairman for the study group on "Science: A Creative Discipline." In later years, Ida became an SMU trustee, and in 1973, she was awarded the Mortar Board, the University's highest honor.

Her participation in civic affairs is impressive and includes service on the Boards of the League of Women Voters, The Dallas Children's Medical Center, the Dallas Symphony Orchestra, and the Scripps Memorial Hospital of La Jolla, California. She has been a member of the Women's Council of Dallas County, the Texas League, the Women's Auxiliary of the Dallas County Hospital District, Dallas Council of World Affairs, Dallas Women's Club, Cadence Club, and the R.B. & Cleo George Memorial Hospital of the Children's Medical Center. She is a Past President of the Dallas Geological and Geophysical Auxiliary and Honorary Member of the Mothers' Club of St. Mark's School of Texas.

In 1977 Ida was awarded Honorary Doctor of Humanities Degrees from Texas Christian University and Austin College. She was also designated a Vice Admiral of the Texas Navy.

Throughout their lives Cecil and Ida Green have been acutely aware of the importance of education in shaping their own destinies. Consequently, by strengthening teaching and research capabilities of several institutions, they have made it possible for thousands of young people to pursue their own educational goals and develop their talents.

The Green name is inscribed on buildings, laboratories, libraries, theatres, rooms and special facilities in Australia, Canada, England and the United States. Their professorships, lectureships, fellowships and scholarships have benefited generations of students and educators at all levels in fields which range across the spectrum from science and medicine to social sciences, humanities and the arts.

For further information on the Greens' philanthropy, please click here.